Our News Team were extremely fortunate last week, as they were given the opportunity of a guided tour of the building work that is currently taking place on our school, by the director of KrolCorlett construction, Simon Krol. Afterwards, they even had the opportunity to sit down for a chat about the project and how it is progressing so far. Here is part one of their exclusive interview!

First of all, we would like to get to know a little more about you and your job. What made you decide that you wanted to become a builder?
Well, my dad was a builder and he started the company in 1965 and when he retired I took the business over, so there has always been a builder in the family.

What qualifications are needed to become a builder?
It depends how far you want to go really. My son is just finishing his GCSEs and is coming to work for me as an apprentice joiner, so he will be working on site for four days a week and going to college one day a week, for the four years that he serves his apprenticeship. He could then go to night school to get further qualifications or get a degree. There are lots of different jobs in the construction industry other than working on site, such as architects, engineers and surveyors so it depends on the type of job that you want to do.

How long have you been a builder for?
A long time! Obviously with my dad being a builder, I spent a lot of time around building sites when I was younger helping him out. When I left school at 16, I went straight into the business so I’ve always been involved in building really.

Have you worked on any other schools or famous buildings?
Yes, we have recently finished working at the National Museum in Liverpool, putting together the new Ancient Egypt exhibition, which was really interesting.

Do you have to work throughout the half terms and summer holidays when nobody is here?
Yes, we do! The best time for us to do some of the messier work is when you’re on your holidays and the school is 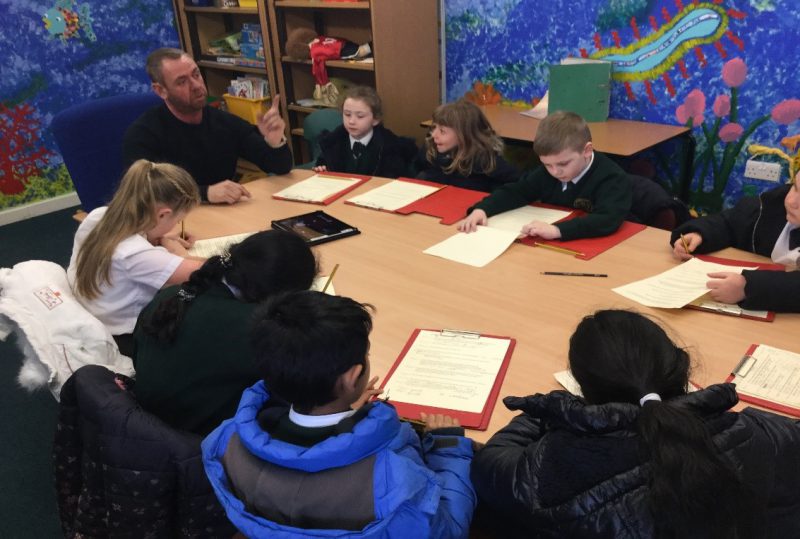 In our school, we have recently had an investigation week and the teachers made up a story that the builders had found a time capsule. Have you ever really discovered anything interesting on any sites you have worked at?
Unfortunately, we haven’t uncovered any artefacts or anything like that but we have put some time capsules in on some of our jobs. In one school that we worked at in Preston, we buried a time capsule that the children in the school had put together, that included lots of different things like photographs, football kits and things that they had made. That could be something that we do here for you guys, you’ll have to ask your teachers!

Now, let’s talk a bit more specifically about the job that you are doing on our school. Is it difficult to work in a place where there are so many people in and around the building every day?
Yes, that’s why the site safety sign we looked at outside is so important! Building sites are always quite dangerous, but even more so when working around children, so we have to be extra careful to make sure that there are no accidents and the site is run safely for you all.

Do you have to follow a lot of rules to ensure you are safe on the site?
Yes we do, there are lots of rules and regulations and we have to put the building together in a particular way to make sure it is safe. At various stages of the construction we also have to phone people called Building Control, and they come and check that we are doing a good job and everywhere is safe.

What are the different jobs or roles that the workers have on site?
Steve, who we met outside, is the site manager and he is in charge of the day to day running of the site. Then we have Adam, who is a site foreman, he works with Steve and is like a junior manager, and underneath them we have the joiners and labourers. The joiners do all of the woodwork around the site and the labourers move the materials around the site to where they need to be, and make sure the site stays clean and tidy. At the later stages of the project we will then bring in sub-contractors such as plumbers, electricians, plasterers and decorators, then it’s all finished!

Do you work on a specific part of the building all of the time or do you all have different areas that you work on?
Well, in this job we are working in two main areas; the compound area on the playground and over by the old main entrance, so the guys split up so that we can work on both areas of the building at the same time.

Stay tuned for part two of this exclusive interview, which will be up on our school website next week!